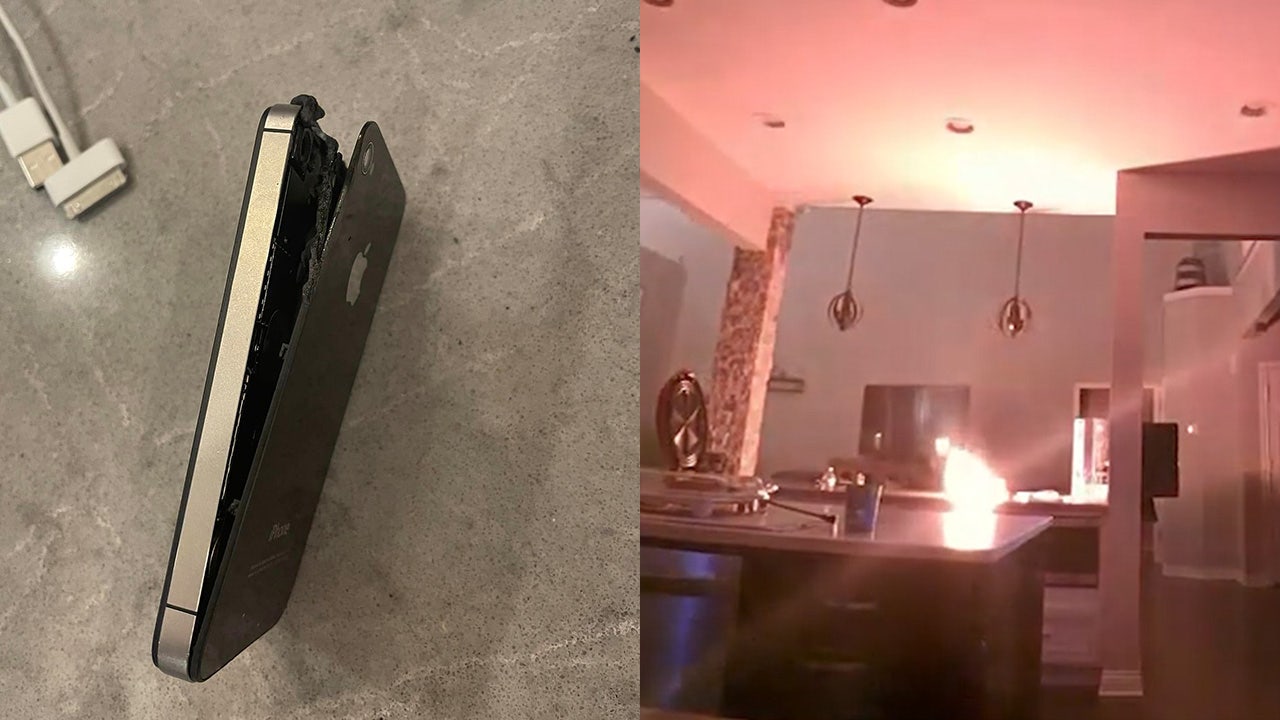 The iPhone bursts into flames while the family sleeps

An Ohio family was shocked to find their destroyed iPhone 4 on their kitchen counter only to find that overnight, the phone suddenly burst into flames while charging. Fortunately, the fire was not able to spread further and was eventually extinguished.

CINCINNATI – An Ohio family is relieved that nothing in their home was seriously damaged or worse, burned to a crisp, when their security cameras captured one of their iPhones bursting into flames while everyone was sleeping.

Jennifer Leisgang and her family hope their story will prevent other families from suffering a worse fate than they did.

On Jan. 9, around 1 a.m., Leisgang said she and her family were sleeping when an iPhone 4 that was left charging on her kitchen counter suddenly burst into flames.

Leisgang told FOX TV Stations that the phone was charging with an original Apple charger.

Home security camera footage shows a small fire igniting and then burning violently on the counter for a few minutes before slowly starting to die out.

The next morning, Leisgang and her husband, Brian, encountered a very unusual scene – soot all over the counter and a broken, blackened phone.

“It had a silicone case on it that split and the phone split open. And there was black soot all over the counter and on the chairs and on the floor,” Leisgang said.

Fortunately, Leisgang’s husband had cleared the island that is usually covered with their children’s schoolwork and other miscellaneous items before going to bed the night before.

“I realized how lucky we were that we didn’t have anything on the bench and that it just came out on its own,” Leisgang added.

Leisgang’s husband shared the video and photos of the aftermath on Facebook as a warning to other Apple users to be vigilant and make sure their electronics are charged away from anything that could potentially catch fire. 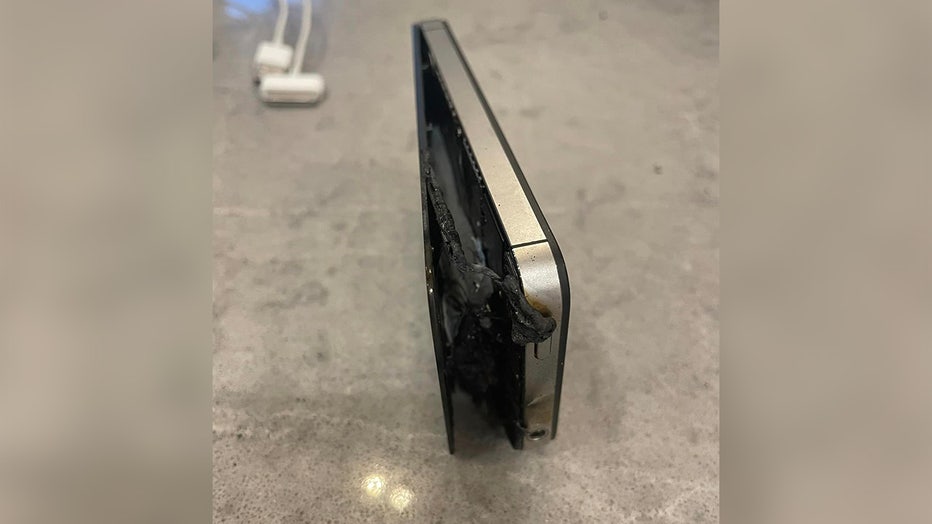 “We were extremely lucky to avoid a house fire,” Brian he wrote on Facebook.

Leisgang said she, like other parents she knows, uses older products like the iPhone 4 to give their younger children something to watch videos with.

But after seeing what happened to his “vintage” device, he wanted to know, how old was it?

Leisgang said she has filed a complaint with Apple hoping to get some sort of advice when it comes to older Apple products, but the company has not been able to give a straight answer.

“Their verbal response, and paraphrasing because I didn’t write it all down, was that my device was vintage and they didn’t expect their customers to use such an old phone,” Leisgang said. “They didn’t really have an answer.”

Leisgang said the company asked her to send the phone to conduct further research. 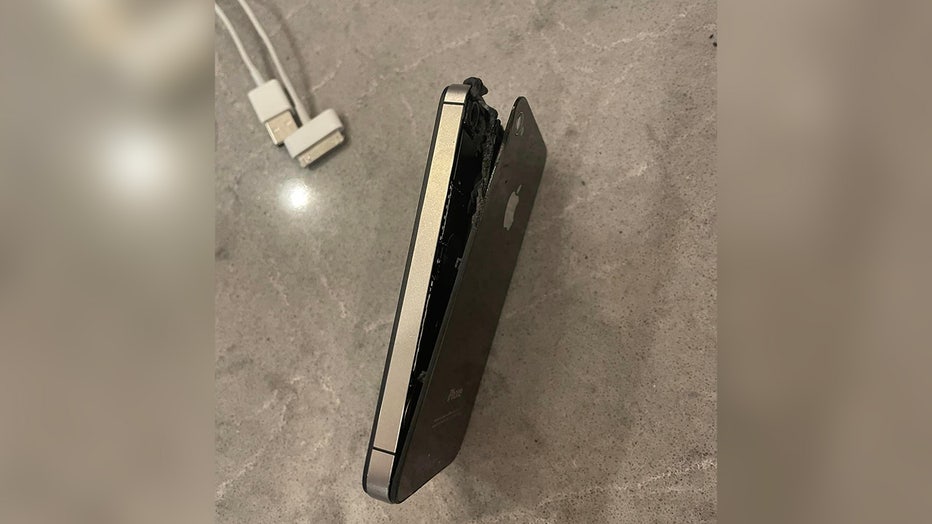 “They were going to mail me a check for a replacement device, but I declined their offer. I didn’t want any of that, it was just reported after hearing so many other stories,” explained Leisgang.

Leisgang said the last he heard about her statement was that it was taken back by Apple’s corporate executive relations and she hasn’t heard from the claim since.

“How old is too old to still be using?” Leisgang has placed. “An Apple phone is like a mini computer if you connect it to wi-fi. It’s a camera. You can watch videos on it. You can take videos. You can watch YouTube. There are many families who still use 4s . and 6s here and the original Apple iPad.”

Apple told FOX TV Stations that they were aware of the incident involving Leisgang’s device and were “looking further into the matter.”

This is not the first time that an Apple product has suddenly burned.

In 2009, Apple actually launched an investigation after several reports of people’s iPhones exploding across Europe.

In 2012, a The Colorado woman’s iPhone 4 has started leaking and smoking while on the table next to her, according to a Mashable report.

Similarly, in 2016, a man in Atlanta, Georgia, was charge his iPhone 6 when he burned in flames and in 2017, an Australian man The car was set on fire by an iPhone 7 which was left in the car while the man went surfing.

Worthy of note is also the Samsung Galaxy Note 7 debacle of 2016 when the company actually had to stop sales because the devices would explode while charging.

Apple’s batteries were also the subject of consumer concern in 2017 after the company admitted that it had slowed down the batteries in the old iPhones for technical reasons.

“We apologize,” the company he said on his website . “We have never – and would never – do anything to intentionally shorten the life of any Apple product, or degrade the user experience to drive customer upgrades.”

The slowdown began with iOS 10.2.1 in 2016, Apple said, to improve power management “to avoid unexpected shutdowns on iPhone 6, iPhone 6 Plus, iPhone 6s, iPhone 6s Plus, and iPhone SE.”

Apple’s admission led to the company offering discounted battery replacements at $29, but many people said they had already spent hundreds of dollars to buy new phones because Apple did not reveal the cause of the problem. If they had known they could buy new batteries, they wouldn’t have been able to buy new phones, some consumers said.

A class-action lawsuit filed in California over the slow-burning batteries ordered the company pay $500 million, including about $93 million to attorneys representing consumers.

Apple has not admitted wrongdoing in the process.

iPhone users who were named in the case would receive up to $3,500 each. The rest of the settlement money would be distributed to owners of the iPhone 6, 6S, 7 and SE models that meet the eligibility requirements related to the operating system they were running at the time.

What causes some phones to “explode?”

The reason behind malfunctioning phones is largely due to the battery. Many – if not all – smartphones have lithium-ion batteries.

Lithium batteries are popular because they pack significantly more energy into a small package.

But their chemistry makes them more likely to catch fire in certain conditions because, unlike other rechargeable batteries, they contain a flammable electrolyte and are kept pressurized.

If the batteries have a manufacturing defect, are damaged, are packed too close, are overcharged or are exposed to excessive temperatures they can overheat, causing a condition called “thermal runaway”.

It is a situation in which the increase in temperature causes a continuous increase – a type of uncontrolled positive feedback. If a single battery overheats, it can cause other nearby batteries to overheat and experience thermal runaway as well. Flammable electrolyte can also ignite.

How to prevent your phone from exploding

Again, while it is very rare, there are many ways to avoid any potential spontaneous combustion when it comes to your iPhone or any smartphone.

Get a cell phone case

Dropping your phone and potentially damaging your battery is one way that can lead to a fiery outcome, according to him pc mag

Again, not all phones will explode immediately after being dropped without a case, but it’s better to be safe than sorry.

Overheating of a smartphone battery has been linked to cases of malfunctioning devices.

But even extremely cold temperatures can have a negative impact on the phone’s battery life, PC Mag said.

It’s best to keep your phone in moderate temperatures if you can help it.

Do not cover your phone while charging

So basically, don’t keep your charging smartphone under your pillow while you sleep. This can lead to overheating, which as mentioned above, can lead to disastrous effects.

While it’s nice to have your phone charged to 100% whenever you decide to go out or get ready for a big scroll through social media before bed, it’s actually better to keep it anywhere between 30% and 80% charged.

Apple’s website actually advises consumers to only keep a 50% charge on a device’s battery.

The Associated Press and FOX News contributed to this report. This story was reported from Los Angeles.